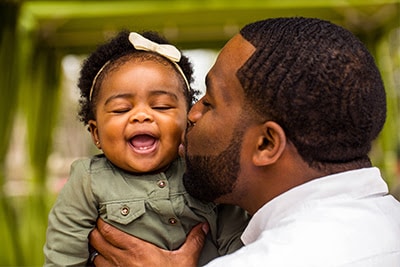 Speculating about how your future kiddo will turn out can be a fun little game. It’s hard not to make guesses and predictions about which traits she’ll inherit from you and your partner respectively, and it seems even harder for friends and family not to put in their two cents (or two dollars). A traits DNA test can help remove the guessing game and get you even more excited about your little one’s arrival.

Maybe your mother-in-law is convinced your daughter is destined for the signature family nose. Meanwhile, your best friends keep telling you that your baby girl is going to inherit your killer smile. Maybe your dad is convinced all future children will inherit his love of sports (he may already be stockpiling tiny jerseys).

So what’s the truth, and what’s an old wives’ (or husbands’) tale when it comes to traits inherited from the dad?

Most genetic traits result from a combination of both parents’ genetic codes. A dash of mom, a sprinkle of dad, mix it all together, bake for nine months, and voila: you have a darling little bun, fresh out the oven. You may be wondering, “where does the hair gene come from” or “what color eyes will my baby have?” and we can help narrow the guessing game down for you! But when it comes to tracing certain traits to certain parents, scientists have identified a particular type of gene responsible for parent-specific traits:

What do you inherit from your father?

Now that we’ve covered a brief overview of genetics, let’s dive into the good stuff. What are the physical traits inherited from father?

Dads are responsible for the gender of their little rugrats, and it’s one of the physical traits that are 100% contributed by dad.

The Supporting Evidence: While mothers will always pass down their X chromosome (considering it’s the only kind they have), fathers will pass down either an X or Y chromosome at random. The gendered difference is entirely dependent on this one minuscule genetic distinction:

The Big Picture: All of the physical differences between boys and girls are due to this tiny chromosomal difference. Dad’s contribution makes a big impact and can significantly affect the different traits your little one will have!

Background: All men inherit a Y chromosome from their father, and all fathers pass down a Y chromosome to their sons. Because of this, Y-linked traits follow a clear paternal lineage. A mutation on the Y chromosome can only be passed from father to son, and all mutations are considered “dominant” in that there’s no second Y chromosome from mom to alter or mitigate the effects.

In addition to the male traits of sperm development, hormone levels, and other distinctly male physical characteristics, there are other non-gendered Y-linked traits:

The Big Picture: Relatives and friends might tell your son he looks identical to his father, and your partner may even feel pride in saying, “like father, like son” when your son does something adorable. For the most part, there’s no real indication that boys take after their dads in looks any more than they look like mom, but Y-linked traits are the exception to this rule.

At least 700 genetic variations are responsible for determining height, coming from both mom and dad’s genes. But there is evidence to suggest that each parent’s “height gene” functions a bit differently. Dad’s genes play a significant role in promoting growth.

The Supporting Evidence: The insulin-like growth factor (IGF protein) is strongly expressed by paternal genes. This genetic trait is also responsible for promoting growth. However, mom’s genes express a somewhat contradictory receptor called IGF2R, which essentially does the opposite by actively repressing dad’s height-inducing genes.

These are both examples of genomically imprinted genes. The imprinted gene is stamped by the origin parent from the beginning, distinctly marking mom’s copy and dad’s copy of the allele. The stamped gene and inherited trait are expressed differently depending on which parent they came from, or they’re only expressed when inherited from one parent, not the other.

It doesn’t matter if Mom’s an Amazon when it comes to height or if Dad’s height is better suited for soccer rather than basketball—Dad’s IGF genes encourage the child to grow tall, while Mom’s IGF2R genes say, slow down buddy, don’t leave me in the dust.

In a sense, they cancel each other out, but both genes play a vital role in the growth of your offspring. Studies on mice illustrate this delicate balance between each parent’s genes:

The theories behind why this happens are fascinating from an evolutionary standpoint. These genetic differences between mom and dad are called “parent-of-origin effects” and have an impact on growth and nutrition:

The Big Picture: Beyond the give-and-take of these two specific genetic expressions, there are loads more variants affecting height from both mom and dad. Dad’s genes strongly influence your child’s size in a certain sense, but whether your children grow up to be 6’5” basketball stars or 5’10” point guards are up to certain genetic conditions from both parents.

As we’ve learned, dads contribute one Y or one X chromosome to their offspring. Girls get two X chromosomes, one from Mom and one from Dad. This means that your daughter will inherit X-linked genes from her father as well as her mother.

When your daughter inevitably ends up with his X chromosome, does that mean she’ll inherit all of his X-linked genes and traits?

The Supporting Evidence: When it comes to a trait passed from father to daughter, dad has a 100% chance of passing down any mutations or variations on his X chromosome. However, this doesn’t automatically mean that all of these mutations will present physically.

Remember, girls inherit two X chromosomes—one from mom, one from dad. So while dad is passing down everything on his X chromosome, mom is also giving their daughter a second copy. Here’s where the dominant and recessive gene come into play:

The Big Picture: While X-linked recessive traits are a toss-up between mom and dad’s DNA, X-linked dominant features (when the mutation is present in the father) will make their way into your little girl’s life.

Put the Rumors to Rest with SneakPeek Traits

While you and your gal pals are pouring over family photo albums and going down the Google-search-rabbit-hole of which genes dictate your baby’s physical traits (the same Google search that—no doubt—lead you to this very article), your kiddo’s father and his buddies might be out doing the same thing.

While you both might wind up making a few lucky guesses, the only real way to determine how everything shakes out is with a DNA test.

SneakPeek Traits is a quick, easy-to-use DNA test to help you in answering the questions like “when do babies get freckles?” or just plain and simple “How will my baby look?” You can collect the sample from the comfort of your own home and, after sending it off to SneakPeek Labs in the included prepaid envelope, you’ll receive tons of exciting information about your baby’s traits, including:

You might even find out whether they become captain of the varsity basketball team! Oh, wait… Sorry, that’s one for the have-to-wait-and-see list.

Some things about your child’s future are meant to remain a mystery—for everything else, there’s SneakPeek Traits.

HealthyWay. 7 Traits Children Get From Their Fathers. https://www.healthyway.com/content/traits-kids-get-from-their-fathers/

Inverse. You’re Genetically More Like Your Dad Than Your Mom. https://www.inverse.com/science/32991-dad-mom-genes-dominance-inheritance

MedlinePlus. What are the different ways in which a genetic condition can be inherited? https://medlineplus.gov/genetics/understanding/inheritance/inheritancepatterns/

adroll_adv_id = "QCWI2LTOPJA7PFIZDY3AFN"; adroll_pix_id = "5DIPBS44TVDY5GPUPYYWLK"; adroll_version = "2.0"; adroll_current_page = "other"; adroll_currency = "USD"; adroll_language = "en_US";
Why is SneakPeek Gender more accurate now?
Why do I need to wait until 8 weeks, when there are 7-week women in the study?
What if I can’t hear my baby’s heartbeat?
Is it safe to use a Fetal Doppler?
How does a Fetal Doppler work?
I used last menstrual period (LMP) to calculate 8 weeks into pregnancy. Are my test results reliable?
Can I purchase SneakPeek early and take it when I’m at 8 weeks?
If I can’t enter a post office due to social distancing or limited hours, are there other ways to return?
Is COVID-19 impacting SneakPeek shipping or results timelines?
In light of COVID-19, is SneakPeek Labs still accepting return samples?
Are SneakPeek products safe from COVID-19?
Why has the results email changed to show a check mark instead of a percentage?
How do I activate my SneakPeek At-Home test kit?
Can I buy the SneakPeek test kit now and use it later?
Influencer Collaboration
Is SneakPeek a pregnancy test?
My blood sample was taken at a participating location. What is the status of my results?
Is shipping free?
Does taking progesterone or other hormones affect my results?
Do blood thinners affect my results?
Do you ship to APO/FPO/DPO addresses?
I’ve seen gender predictor tests that use urine samples. How is SneakPeek different?
What is the difference between SneakPeek At-Home and SneakPeek Clinical?
Can I take the SneakPeek Test if I’m breastfeeding?
Do hormone disorders such as PCOS affect my results?
How is my privacy protected?
Is the test safe?
How quickly will I receive my refund?
When is SneakPeek Customer Care available?
What do I do if I have a question about my order?
I’m having twins. Can SneakPeek determine the gender of each one?
What is SneakPeek’s guarantee?
I’ve previously had a boy. Will that affect my test result?
Does a previous miscarriage affect my test results?
How do I ensure an accurate test result?
I can’t find my results email, what do I do?
When will I receive my results?
How are my results given to me?
How will I know you received my sample?
I don’t want my gender results to be sent to my email address. Can I have them sent to someone else?
What email address should I provide during checkout?
Can I track my sample?
What is the shipping timeline?
How long does my sample stay stable after collection? How long can it stay stable during shipping?
What is the difference between SneakPeek Standard and SneakPeek FastTrack?
Can I use SneakPeek if I am having a multiple-birth pregnancy?
How is the DNA blood sample taken?
How accurate is the SneakPeek Early Gender DNA Test?
When can I use the SneakPeek test?
When in my pregnancy can I take the SneakPeek Test?
Do you have a pregnancy calculator that tells me when I can take the test?
How does the SneakPeek Test work?