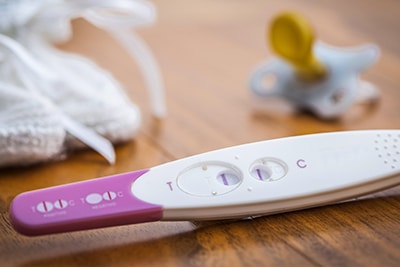 It’s exciting when you and your partner decide it’s time to add another leaf to the family tree. It’s a time to be close, to be excited for the future, and… to start peeing on things—specifically, pregnancy tests.

As you start the baby-making journey, you’ll definitely want to know how soon can a pregnancy test detect pregnancy?

It varies by test, but in short, the soonest a home pregnancy test can read positive is about four days before your first missed period, or about three and a half weeks after an egg is fertilized.

Pregnancy tests are able to detect a hormone called human chorionic gonadotropin, or HCG. This hormone is produced during the early stages of pregnancy. But understanding that hormone, how pregnancy tests work, and how soon a pregnancy test will read positive may require going back to the basics—the basics of the birds and the bees that is.

While you’re probably familiar with the mechanics of how a baby gets made—AKA the fun part of reproduction—there’s an extraordinary series of events that need to happen inside the mom-to-be’s body in order for a home pregnancy test to display a positive result.

Here’s how that breaks down:

But you’ll need more ingredients than an egg to make a bun in your oven—so to speak.

When an embryo is successfully implanted into the uterine wall, the body goes into baby-mode, producing hormones to help the embryo thrive. One of the most important of these hormones is called HCG. The HCG is the hormone pregnancy tests look for to see if you’re pregnant.

The ABC’s of HCG – The Hormone Pregnancy Tests Look For

The human chorionic gonadotropin hormone (mentioned above) is essential to the early stages of pregnancy. It helps the body create a healthy environment for the fertilized egg to thrive.

Because its main role is to support an embryo in the early stages of pregnancy, HCG is produced as soon as a fertilized egg is implanted in the uterine wall. HCG is produced by both the embryo and the uterine wall to help create a nourishing environment for the embryo to grow. After implantation (6-9 days after initial fertilization), your body’s HCG levels increase every 2 or 3 days. HCG can be found in the blood and urine of a pregnant woman.

After all of that biology, you may still be wondering, how soon will a pregnancy test read positive?

This timeline can help illuminate the timing of ovulation, fertilization, implantation, and when to take a pregnancy test.

Approximately four days before your missed period, you can take a test to see if that happy meeting between sperm and egg has taken place.

But how does that little test strip work?

A simple line pregnancy test is made up of four essential parts:

The control window antibodies are designed to recognize the dyed antibodies and bind to them. This causes the dye to create a “control line,” proving that the antibodies are active and the test is working as it should.

So in this test, two lines make a positive pregnancy test while one line makes a negative.

How accurate are pregnancy tests?

Many pregnancy tests claim to be 99% accurate. But do you ever wonder why you never see a test that claims to be 100% accurate? That 1% allows for human error, extraordinary circumstances, and variables you can’t always control.

Factors that Cause a False Negative

Factors that Cause a False Positive

A false positive pregnancy test result is extremely rare. The monoclonal antibodies are designed to interact with HCG, so the chances of getting a positive result when you aren’t pregnant happens very, very infrequently.

Some possible factors that could lead to a false positive include:

When that test strip finally tells you the good news, you may feel completely overjoyed—then overwhelmed with more questions.

One of the biggest questions in a parent’s mind after a positive pregnancy test?

Am I having a little boy or a little girl?

You won’t have to wait long to find out with a little help from the SneakPeek Early Gender DNA Test. At 99.9% accurate, this gender prediction test can tell you whether you’re having a boy or a girl as early as eight weeks into pregnancy.

Even better? There are no vague test strip results to interpret, no sticks to pee on—just answers. Find yours with the SneakPeek Early Gender DNA Test!

Healthline Parenthood. When You Should Take a Pregnancy Test. https://www.healthline.com/health/pregnancy/five-signs-to-take-pregnancy-test

Healthline. What is Ovulation? Cycle Timeline, Pain and Other Symptoms. https://www.healthline.com/health/womens-health/what-is-ovulation

What to Expect. Your Guide to Pregnancy Hormones. https://www.whattoexpect.com/pregnancy/pregnancy-health/pregnancy-hormones.aspx#progesterone

Mayo Clinic. Home pregnancy tests: Can you trust the results?