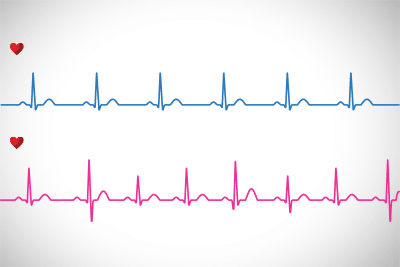 Can you predict a baby’s gender based on heart rate?

The answer is no—your baby’s heartbeat is a wonder, but it can’t tell you whether you’re about to meet a little boy or a girl, like an evidence-based gender prediction test can.

Scientists and researchers have conducted extensive studies that disprove baby gender prediction based on heart rate. Even if it can’t reveal gender, your baby’s heart is certainly a work of art—and love.

The Theory Behind the Heartbeat Gender Prediction Method

According to this gender prediction method, you can differentiate a baby boy from a baby girl in the womb by measuring a baby’s fetal heart rate using a baby heartbeat monitor. A baby’s heart rate zones can be detected by a vaginal ultrasound as early as 5 ½ to 6 weeks after conception.

This method of gender prediction might be particularly enticing for parents-to-be because it implies you can learn the fetal gender very early in the pregnancy. Theoretically, you can find out the gender of your child at your first trimester ultrasound.

But according to this technique, how do you differentiate between girl heartbeats and boy heartbeats?

The rationale for this heart rate-gender distinction is a bit fuzzy, but one hypothesis arose from studies about a baby’s eating habits.

Could calories affect a baby’s heart rate enough to differentiate a growing little girl or a baby boy? Thanks to scientists who specialize in growing babies, we have the answer—nope!

We have two studies to thank for disproving this baby gender prediction method. One study was published in 2006 and the other in 2015. Both sought to test the idea that gender could be discovered through fetal heartbeats.

The most important question researchers asked was “Is there a significant difference between a baby boy’s heartbeat and a baby girl’s?”

Published by D.S. McKenna, G. Ventolini, R. Neiger, and C. Downing, this study spent 5 years collecting data from pregnant women in their first trimester. The research was conducted in affiliation with the Department of Obstetrics and Gynecology at Wright State University in Dayton, Ohio. Below is a breakdown of the key aspects of this insightful research:

Quick facts about this study:

The key takeaway here? The difference between a baby girl’s fetal heart rate and a baby boy’s was only about 3 beats. Not enough to truly distinguish a boy from a girl when a baby is growing inside the womb.

When it comes to scientific theory, it’s always wise to double-check your results. Which is what this team of scientists set out to do. The authors, L.A. Bracero, D.J. Seybold, S. Witsberger, L. Rincon, A. Modak, and L.V. Baxi, were scientists from some of the most well-known research universities and hospitals on the East Coast. But instead of studying pregnant women in real-time, these researchers looked to the past.

The research team answered, “Is there a difference in fetal heart rate between girls and boys?” by using medical records of pregnant women from 2006-2010. The study boils down to several key components, listed below:

Quick facts about this study:

Why the difference in average bpm between the studies?

You might have noticed that the average heart rates each study found was pretty different. The 2006 study bpm average ranged from 151.1-154.9. The 2015 study range was higher, about 167-167.3. Does this heart rate variability mean one study was wrong and the other was right?

There are two possible reasons for this:

Sample size is the number of people you study out of a population. The larger the sample size, the more likely the study represents the population as a whole. Because the 2015 study used a larger sample size, it’s possible the bpm averages from this study were more accurate.

When conducting a scientific experiment, you want to be able to recreate the same study scenarios for each participant to help you get the most accurate results. 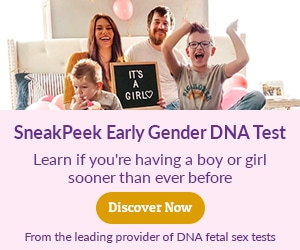 For example, if you were testing how happy people feel after eating a bar of chocolate, you would want to make sure each participant was eating the same brand, same amount, and in the same conditions. Someone eating an artisanal Belgian chocolate truffle in a swanky cafe might feel completely different than someone who eats a candy bar left over from Halloween years ago in a cold uncomfortable laboratory.

These elements that can skew results are called variables. And the more variables you can control in an experiment, the more accurate the findings.

This is much easier to do when you have living breathing participants—and much more difficult when you’re drawing conclusions from documents, like the 2015 study.

In the 2015 study, researchers couldn’t know if ten pregnant women had the hiccoughs during their ultrasound, making it difficult for the technician to find an accurate bpm. Or, maybe most of the ultrasound technician’s appointments were scheduled right after lunch, so he was thinking about cheeseburgers and made a human error when recording the bpm.

But luckily, the 2015 study factored in the possibility of these variables by calculating a margin of error. A margin of error is the amount that is allowed for in a study just in case of miscalculation or unknown variables—like hungry ultrasound technicians. So essentially, the scientists can say: “Here are our findings… give or take this amount.”

This Little Heart of Yours

From its first flutter as a cluster of cells to its first beats outside the womb, your baby’s heart is amazing. Although the baby’s heart rate zones can’t tell you if you’re about to meet a little boy or a little girl, every beat is a testament to the extraordinary connection you have with your baby. After all, some moms say that having a child is like having your heart live outside your chest. And after nine months of growth and safety in your belly, your child will always have a little piece of your heart with them.

And while you may not detect your baby’s gender from the little pulse in your belly or through other acclaimed methods such as the pencil gender test, there is a simpler message in those tiny beats—a whole lot of love is about to enter your life.

Get to The Heart of The Gender Question with SneakPeek

You shouldn’t have to wait too long to get to know if your baby’s extraordinary heart belongs to a beautiful baby boy or a gorgeous little girl. Discover your baby’s gender with the SneakPeek Early Gender DNA Test.

The Early Gender DNA Test can determine a baby’s sex as early as 8 weeks into pregnancy and has proven to be 99.9% accurate in laboratory studies. Even better? You can take the gender blood test in the comfort of your home.

Get to the heart of your gender questions with SneakPeek.

Healthline. How Early Can You Hear Baby’s Heartbeat on Ultrasound and By Ear? https://www.healthline.com/health/pregnancy/when-can-you-hear-babys-heartbeat#TOC_TITLE_HDR_1