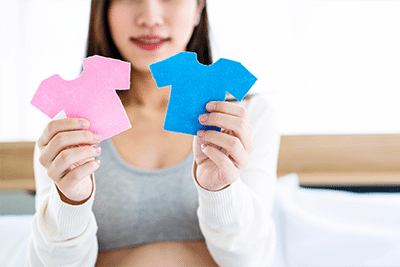 When it comes to pregnancy, calendars play an essential role in how we learn about our changing bodies and our growing babies. But some changes you won’t find in the calendar the doctor gave you. Maybe in your 7th week, you discover the “joys” of morning sickness. Maybe by the 10th week of pregnancy, you find there’s no such thing as too many peanut butter and banana sandwiches. There’s practically a new discovery for every day on the pregnancy calendar, that is if you are referring to an ancient Chinese or Mayan calendar gender prediction model.

As your pregnancy discoveries progress, you might find yourself marking off days in a mental calendar. But can a calendar help you learn more about your baby’s gender?

Used in imperial courts and by modern moms, the Chinese gender calendar prediction method has a rich and storied past. But how does it work, and how accurate is it when it comes to predicting a baby’s sex? Luckily, there’s no need to hop on a plane to Beijing to learn more about this ancient Chinese gender prediction technique.

How To Use the Chinese Calendar Gender Prediction Method

This method of predicting a baby’s sex states that the lunar month of conception and the lunar age of the mother at the time of conception can tell you whether to expect a baby boy or a baby girl.

So to understand how to use this alternative method as a gender prediction test, you’ll need to look to the moon—that is, the lunar calendar.

That’s why Chinese New Year is often celebrated in January or February.

Using the Chinese Lunar Calendar to Predict A Baby’s Gender

Now that we’ve covered the basics of the Chinese calendar, it’s time for some predictions! The Chinese gender prediction method actually starts with a Chinese birth chart. This one, in fact: 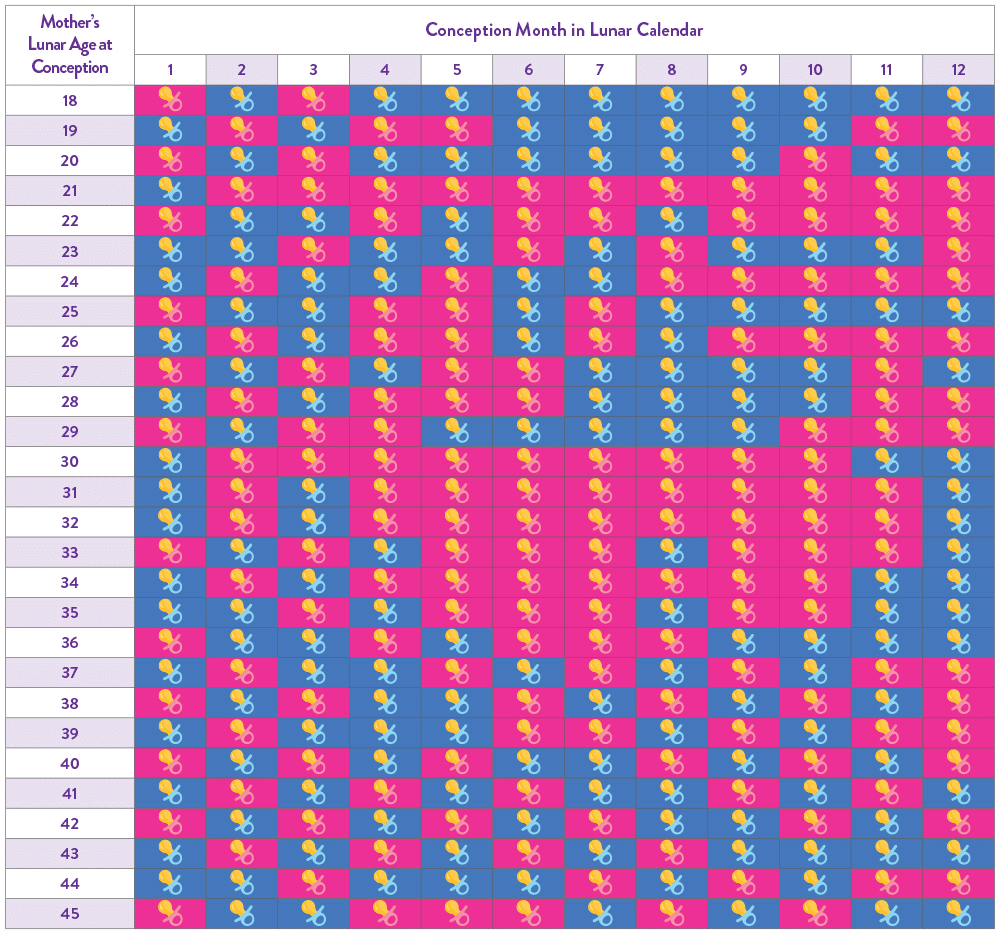 Here’s how to put this ancient Chinese gender chart to use:

For example: Let’s say you’re 31-years-old—according to a Gregorian calendar—and you conceived around March 18, 2020.

While this is primarily a gender prediction method, many have used this chart to sway the odds for a baby boy or a baby girl. By consulting the Chinese birth chart, you can try to schedule the conception date to tip the scales in favor of your preferred gender, also known as gender swaying.

While it’s certainly a fun way to guess the gender of your little one, the Chinese calendar gender prediction technique hasn’t been backed by science. Researchers and scientists haven’t verified the accuracy of this gender prediction method. Which means it has a 50-50 chance of being accurate.

Want to try a fun little test? Plug in your mother’s conception age and your conception date and see if the result is your gender!

Where did the Chinese calendar gender prediction method come from?

The history of this particular gender prediction method is part mystery, part legend.

According to one account, the method was first revealed to the public in a Hong Kong newspaper in the 1970s. The article states that this Chinese gender predictor tool was used in the imperial court of the Qing Dynasty.

The Qing Dynasty lasted from 1644–1911, so the writers weren’t able to pinpoint exactly when the method began. They did claim that the method was written on a specific document and kept hidden by trusted eunuchs. The method was kept a closely guarded secret, used only by elite families. When the Qing Dynasty ended, the document disappeared—some say to Great Britain—but one scholar was able to copy the chart and the method.

From there, the provenance became murky, until 1972 when the alleged owner of that gender prediction copy came forward to share his findings with the world.

Another account says that this method of gender prediction was discovered 700 years ago—during either the Ming or Yuan Dynasty—in an ancient Chinese imperial tomb. How ancient? It’s hard to say. The earliest Chinese dynasty dates back to 2070 BCE, so this method might have been used for thousands of years.

Could both origin stories be true? Absolutely.

Maybe this prediction method was discovered in an ancient tomb during the Qing Dynasty. From there, the imperial court may have reintroduced the method back into practice. Then, years later, the chart and method could have been copied by an intrepid scholar as the dynasty came to an end.   One thing’s for sure: in the last ten years (thanks to the internet), this has become a popular gender prediction method in the western world.

Other Chinese Methods of Gender Prediction

In 2009, researchers published a sociological study of pregnant women in China. The study asked whether the women hoped for a boy or a girl, what gender they thought their babies would be, and various methods and explanations for why they believed they were having a boy or a girl.

Here are a few other ways Chinese women predict the gender of their baby:

However, this particular gender prediction belief might be unique to the region in which this study took place. Why? Because there’s a popular Chinese saying about gender prediction that states “Girls steal your beauty.” When it comes to deciphering which practice is more accurate, perhaps another saying applies here—beauty (and gender prediction methods based on perceived beauty) is in the eye of the beholder!

Find Out If Your Predictions Were Right With SneakPeek

It can be a blast to consult ancient methods of gender prediction and explore different cultures’ approach to discovering a baby’s gender. At a certain point, though, you just want to know! Now, you can discover your baby’s gender earlier than ever with the SneakPeek Early Gender DNA Test.

At just 8 weeks into pregnancy—that is, about 56 days on either calendar—the SneakPeek Early Gender DNA Test can determine whether you’re having a little boy or a little girl. The gender blood test kit comes with simple instructions, and everything you need for the test is there. Once you’ve completed the test, ship off your DNA sample to one of our SneakPeek Labs using the prepaid packaging. Soon after your sample is received, you’ll discover your baby’s gender.

It’s simple. It’s safe. And the SneakPeek Early Gender DNA Test has been proven to be 99.9% accurate in laboratory studies. That’s a little better than 50-50!

Every day brings you closer to meeting your little boy or girl. But now, you can mark your pregnancy calendar for an even earlier reveal of your baby’s gender with SneakPeek.

US National Library of Medicine. Dreams of Tigers and Flowers: Chinese Gender Predictions and Preference in an Urban Mainland Chinese Sample During Pregnancy. https://www.ncbi.nlm.nih.gov/pmc/articles/PMC2690710/

Voices. What is age reckoning? https://www.sbs.com.au/topics/voices/culture/article/2016/06/23/what-age-reckoning