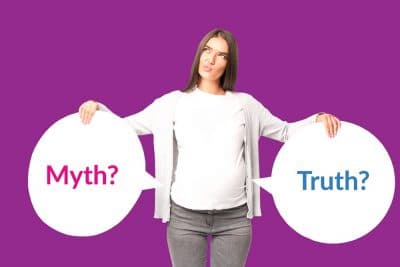 Pregnancy advice can often feel like diet advice. The “rules” seem to change every few months, making it hard for the average pregnant woman to know what’s true and what’s not.

This article attempts to combat this by breaking down the common pregnancy myths, like:

Learn what’s true, what’s not, and what myths during pregnancy fall somewhere in the middle.

In Expecting Better, Emily Oster asks the very same question. Out of all foods, why has sushi been put on the list of do’s and don’ts for pregnant women to eat? What is it about fish in general that makes it off-limits?

There are two good reasons why sushi and raw fish have been tagged with warning signs: salmonella and campylobacter. Both of these foodborne illnesses are commonly found in raw fish (among other things) and are similar on some degree:

So, is eating sushi harmful when you’re pregnant? Not any more than if you weren’t pregnant. Oster continues in her book that pregnant women (and, frankly, all people) should probably avoid sushi that is more likely to be old or made improperly—think, gas station sushi. However, pregnant women don’t need to avoid sushi like the plague.

Results: Slightly True. While yes, there may be harmful bacteria from uncooked fish, it’s no more harmful for pregnant women than it is for women who aren’t pregnant.

#2 Want to Know Your Baby’s Gender? Urine Luck… (Or Maybe Not)

There are probably about 100 gender-discovery tests you can find online. In this information age, you’re probably left wondering which ones work and which ones don’t. Well, if it involves urine, you can be sure that it’s a bust.

No sex-specific chromosomes are found in urine. Essentially, urine is made up of quite a few substances, primarily:

Nowhere on this list are X or Y chromosomes that would indicate the gender of your baby, because there are no pathways for baby’s DNA to mix with your urine. So, mixing urine with baking soda, or beet juice, or any other crazy mixture you can find online (Drano, one website suggested!?), will only reveal whether you have acidic or basic urine.

When it comes to urine-based gender tests, this may seem like an ideal way to predict gender, but…

What aren’t pregnancy boy or girl myths? Lucky for you, urine in the right place.

SneakPeek’s At-Home Early Gender Prediction Test is 99.9% accurate at 8 weeks into pregnancy. It’s an incredible leap in gender detection technology, and it’s much cheaper than a lot of the elaborate gender-revealing schemes out there. Starting at $79, you can discover the gender of your little one earlier than ever before with our gender prediction test!

This one you may or may not have heard: Heartburn makes a hairy baby. It’s strange, but perhaps it’s so strange, it just might be true!

According to a study done at John Hopkins Medical Institution, there might be a correlation between heartburn and fetal hair growth. Sixty-four women were ranked on self-reported severity of heartburn, and their newborn’s hair was documented shortly after birth. Here are the results:

Where did this leave the researchers? According to the three who championed this study:

Contrary to expectations, it appears that an association between heartburn severity during pregnancy and newborn hair does exist. We propose a shared biologic mechanism involving a dual role of pregnancy hormones in both the relaxation of the lower esophageal sphincter and the modulation of fetal hair growth.

Results: The myth has merit. Further research is still needed to confirm that this is true, though early research is promising.

#4 Are You Dying to Dye Your Hair?

Not to keep you in suspense: This myth is going to be busted. Hair dye gained flack for one reason… Pregnant women should not be inhaling the fumes of bleach—a common ingredient in hair dyes.

Bleach fumes are as equally strong a disinfectant as the liquid itself (notably, because it’s the same chemical composition). When the disinfectant enters the lungs, it can wipe out the natural, healthy biome of microbes living there.

Is this more dangerous when you’re pregnant? Not really. If you’ve been dying to dye your hair since getting pregnant, go ahead. Just use extra caution if using a dye that contains bleach. Better yet, use a hair dye that doesn’t have any bleach! If the bleaching agent is crucial, then:

So, will dying your hair harm your baby? Not unless you’re dunking your head in bleach should you experience any complications.

#5 Caffeine and Alcohol | Any Buzzing Allowed?

Consuming caffeine and alcohol are two hotly contentious issues for pregnant women. Just try having a glass of wine while pregnant in public and watch how people around you react. But the question is: Are people right to gawk? Is there something inherently bad about drinking alcohol (or a cup of coffee) when you’re in your first, second, or third trimester?

To begin, where did the stigma with alcohol originate?

This is nothing to take lightly as these are serious complications, but let’s return to the expert, Emily Oster for a step back. In her book, she dives deep into the research and analyses what studies have shown between pregnancy and drinking alcohol. She points out that having one or two drinks per week can’t be classified as the same amount of drinking that causes FASD.

Oster concludes that: “there is no good evidence that light drinking during pregnancy negatively impacts your baby.” How did she define light drinking?

In a similar fashion to alcohol, caffeine consumption has also been heavily debated as a potential risk to the unborn baby. Here, Oster found that the research was actually quite lenient.

Beyond this, there is research that suggests regularly consuming more than 4 cups of coffee can lead to miscarriage. Further studies are needed to determine how accurate this is. Still, because coffee can negatively affect sleep cycles, cause headaches, and increase heart rate and blood pressure, decreasing the amount of caffeine intake can mitigate certain side effects of pregnancy itself.

Results: The myth has merit. To say that pregnant women need to completely abstain from alcohol or caffeine is not true. However, the myth has merit because consuming more than the recommended amounts does have serious health implications on the developing fetus.

#6 You’re Eating For Two Now…Or Are You?

Yes, you are “eating for two” now, but you’re not eating for two fully grown humans! Remember that your growing baby may only be the size of a mango when you feel hungry enough to eat a hundred mangoes. Allow your pregnant belly shape to grow naturally with the right amount of calories each day.

Let’s break down the science—it’s what we do best.

According to the Institute of Medicine, the average total weight gain during pregnancy is typically between 25–35 lbs. WebMD breaks down this weight gain, which comes to an additional:

Where does this leave the whole “eating for two” myth?

Results: Not True. 100-300 calories a day is not enough to warrant the message of eating twice as much food. Especially when the normal calorie consumption of a woman is around 1800 to 2400 calories, without taking into account physical activity. Throughout your first trimester, you may find yourself craving all sorts of foods, but before you jump to conclusions on the topic of pregnancy cravings and gender, consider taking the gender blood test to find out what gender to expect.

Common pregnancy myths and old wives’ tales are usually passed down for a reason—that reason could be based on hundreds, even thousands of years of correlative anecdotes (such as in the case of the heartburn and newborn hair) or it could be based on nothing but mashugana (such as the urine-based gender tests).

While some pregnancy dos and don’ts are just myths, all it takes is a little digging into the research to help you make the right decision for yourself.

When in doubt, we’re here to help!

Popular Science. Cleaning with bleach might increase your chance of getting COPD. How worried should you be? https://www.popsci.com/cleaning-with-bleach-might-increase-your-chance-getting-copd-how-worried-should-you-be/

WebMD. Eating for 2 — but Not Too Much. https://www.webmd.com/baby/features/eating-for-2-not-too-much#1