When you’re pregnant, the transformations happening in your uterus might always be on your mind. Small hands are forming, a little face is taking shape, and tiny toes are wiggling for the first time. Your unborn baby’s body is developing into something amazing.

The same goes for your baby’s head.

Your baby’s brain and head start developing soon after conception, but is head development influenced by gender? Can the shape of your baby’s skull give you an indication of whether you should paint the nursery pink or blue?

From reading belly shapes to calendar dates, parents throughout the ages have sought ways to discover their baby’s gender during pregnancy. One gender prediction test theory declares that sugar cravings lead to a little girl. Another theory states that shinier hair and a radiant complexion indicates a little baby boy.

And then there’s the skull theory.

What is the skull gender theory?

The skull theory is a gender prediction method often compared to others such as nub theory or Ramzi theory and are very different from the common gender blood test. It is the idea that male and female babies’ heads develop into different shapes in the womb. Because an abdominal ultrasound or transvaginal ultrasound can show a baby’s head long before it can show a baby’s sex organs, this theory suggests that parents can learn their baby’s gender as early as 12 weeks.

What an Ultrasound Can Show You, and When

When a pregnant woman gets an ultrasound, it is used by medical professionals to show images of the baby, the placenta, placenta placement, the amniotic sac, and the ovaries. It’s how doctors take a peek at a baby’s developmental progress and keep an eye out for potential risk factors.

Most pregnant women will typically have three two ultrasound scans during their pregnancy:

So why does it take so long for the ultrasound to spot the difference?

Until babies reach 14 weeks of gestation, both female and male organs are the same size and look to be actually about the same shape. That means you wouldn’t be able to tell the difference between a boy’s sex organ and a girls’ sex organ.

However, after week 14, the male organ begins to develop into its distinct form. By the 18th week, there’s a clear indication of a baby’s gender.

How to Use the Skull Theory Gender Prediction Method

Assuming you’ve heard the saying: a picture is worth a thousand words. That can be especially true for your ultrasound scan images, especially if you’re just looking for one word—boy or girl.

If you’re trying to use the skull theory to learn your baby’s gender, here are a few key steps to follow as you’re preparing for your end-of-first trimester ultrasound:

1. Get a clear picture

Those who use this gender prediction method agree—the clearer the picture, the better. Since it may be difficult to judge the nuanced differences between a girl’s head shape and a boy’s, high-contrast ultrasounds are your best friend.

2. Frame the shot so that the baby’s head is in profile

To use the skull theory method, you’ll need to look at a baby’s head in profile. Moms who swear by this method advise the image to be angled so you can see the baby’s skull clearly from front to back.

3. Ask for plenty of pictures

If your baby is already a little wiggle worm, it may be hard to get a still shot. Advocates of this method suggest that you ask the technician for multiple images to increase your chances of catching a good one.

Reading the Results of a Skull Theory Method

Now that the jelly is off your belly and you’re holding the first images of your child in your hand, it’s time to read between the lines—with some descriptions of skull theory examples to help.

Skull Appearance for a Boy 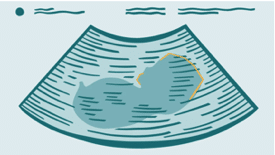 Skull Appearance for a Girl

Smoother, rounder foreheads, round chins, and smaller brow ridges point to a baby girl according to this method: 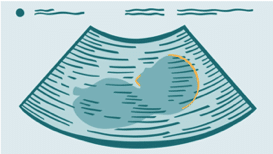 Is the Skull Theory Accurate?

When it comes to skulls and bone shapes, who better to answer this question than Dr. Kristina Killgrove, assistant professor of anthropology at the University of North Carolina, Chapel Hill.

Needless to say, she knows her bones.

So here’s what Dr. Killgrove had to say about the skull theory:

“It makes no sense. Anthropologists and archaeologists can, in fact, tell the difference between adult male and female skulls—sometimes. But the skeletons of baby boys and baby girls just don’t look that different.”

In short? The skull theory isn’t exactly—ahem—ahead of the game when it comes to baby gender prediction.

Possible Origins of the Skull Theory

Here’s a head scratcher—where did the theory that babies skulls could determine gender even come from? Scientists have believed that the head’s shape held more information than just what hat size would be optimal for an individual for generations.

Dr. Killgrove does point out that adult human male and female skulls can—sometimes—be distinguished from another.

(If your inner bioarchaeologist is awakening—or if you’ve always considered yourself a bit of an Indiana Jones type—you can learn more about the difference between male and female adult skeletons with the help of the Smithsonian National Museum of Natural History).

Bioarchaeologists like Dr. Killgrove use these indicators to guess the gender of a human skull—however, the skull differences between girls and boys don’t fully develop until their pubescent years.

In fact, a baby’s skull stays pretty soft in the womb, and their skull bones don’t fuse and solidify until after delivery. Scientists believe there are two primary reasons for a baby’s soft skull.

A baby’s slightly malleable skull shape gives babies more room to grow in the uterus, which is adjacent to the bladder.

An infant’s brain is a bit bigger than their exit door. A soft skull helps a baby emerge into the world from the womb through the birth canal more easily.

The “soft parts” of a baby’s skull solidify by about 18 months of age, but a human skull isn’t fully formed until the age of 20—which is why bioarchaeologists have an easier time distinguishing male or female skulls in adults rather than infants or children.

However, the skull isn’t always the most reliable way to determine a skeleton’s gender for adults either. The pelvis, however, is a bioarchaeologist’s gender determining go-to. A human female’s pelvis is broader and more bowl-shaped than a male’s—which tends to be more square. Why? The unique shape of a woman’s pelvis allows her to carry a child.

Men’s pelvises? Not so much.

Run your fingers over your head—you probably feel bumps and divots that have been a part of you for your whole life. But in the 1700s, a German doctor named Franz Joseph Gall suspected those bumps could speak volumes about a person’s head, health, and heart. He called this pseudoscience “phrenology.” Dr. Gall claimed that those little bumps on your head could indicate a variety of characteristics, including:

Maybe phrenology was the grandfather of the Skull Theory gender prediction method. However, no grounded scientific studies have verified Dr. Gall’s claims—or the baby skull theory. So reading someone’s skull-bumps, or a baby’s head in an ultrasound, is no more telling than a fortune teller reading your palm.

Instead of waiting until the end of your first trimester to stare at the ultrasound to glean your baby’s sex, you can find out the gender of your baby as early as 8 weeks into your pregnancy.

You just need a little help from SneakPeek.

Getting Ahead of Your Baby’s Gender with SneakPeek

While your baby grows from head to toe, your head might be filled with questions about your future child. Get answers sooner than ever with The SneakPeek Early Gender DNA Test.

This simple, safe test can be taken as early as 8 weeks into your pregnancy—weeks before your first ultrasound. Just order the test kit, complete the test in the comfort of your home, and send it to SneakPeek Labs in the provided pre-paid packaging. You’ll learn your baby’s gender soon after your kit is received.

What’s even better than finding answers early? Being confident in those answers. The SneakPeek Early Gender DNA Test has proven to be 99.1% accurate in laboratory studies.

Learn your baby’s gender sooner than ever with SneakPeek!

Healthline. Can Using Skull Theory Reveal If You’re Having a Boy or a Girl?. https://www.healthline.com/health/pregnancy/skull-theory#what-skull-theory-is

What to Expect. Fetal Development: Your Baby’s Sex. https://www.whattoexpect.com/pregnancy/fetal-development/fetal-sex-organs-reproductive-system/

What to Expect. Level 2 Ultrasound: Is It Only Scheduled When You’re an “Older Mom”? https://www.whattoexpect.com/pregnancy/ask-heidi/level-2-ultrasound.aspx

Smithsonian Natural History. Is The Skeleton Male or Female? https://naturalhistory.si.edu/sites/default/files/media/file/wibskeletonmaleorfemalefinal.pdf

Healthline Parenthood. How Early Can You Hear Baby’s Heartbeat on Ultrasound and By Ear? https://www.healthline.com/health/pregnancy/when-can-you-hear-babys-heartbeat

adroll_adv_id = "QCWI2LTOPJA7PFIZDY3AFN"; adroll_pix_id = "5DIPBS44TVDY5GPUPYYWLK"; adroll_version = "2.0"; adroll_current_page = "other"; adroll_currency = "USD"; adroll_language = "en_US";
Why is SneakPeek Gender more accurate now?
Why do I need to wait until 8 weeks, when there are 7-week women in the study?
What if I can’t hear my baby’s heartbeat?
Is it safe to use a Fetal Doppler?
How does a Fetal Doppler work?
I used last menstrual period (LMP) to calculate 8 weeks into pregnancy. Are my test results reliable?
Can I purchase SneakPeek early and take it when I’m at 8 weeks?
If I can’t enter a post office due to social distancing or limited hours, are there other ways to return?
Is COVID-19 impacting SneakPeek shipping or results timelines?
In light of COVID-19, is SneakPeek Labs still accepting return samples?
Are SneakPeek products safe from COVID-19?
Why has the results email changed to show a check mark instead of a percentage?
How do I activate my SneakPeek At-Home test kit?
Can I buy the SneakPeek test kit now and use it later?
Influencer Collaboration
Is SneakPeek a pregnancy test?
My blood sample was taken at a participating location. What is the status of my results?
Is shipping free?
Does taking progesterone or other hormones affect my results?
Do blood thinners affect my results?
Do you ship to APO/FPO/DPO addresses?
I’ve seen gender predictor tests that use urine samples. How is SneakPeek different?
What is the difference between SneakPeek At-Home and SneakPeek Clinical?
Can I take the SneakPeek Test if I’m breastfeeding?
Do hormone disorders such as PCOS affect my results?
How is my privacy protected?
Is the test safe?
How quickly will I receive my refund?
When is SneakPeek Customer Care available?
What do I do if I have a question about my order?
I’m having twins. Can SneakPeek determine the gender of each one?
What is SneakPeek’s guarantee?
I’ve previously had a boy. Will that affect my test result?
Does a previous miscarriage affect my test results?
How do I ensure an accurate test result?
I can’t find my results email, what do I do?
When will I receive my results?
How are my results given to me?
How will I know you received my sample?
I don’t want my gender results to be sent to my email address. Can I have them sent to someone else?
What email address should I provide during checkout?
Can I track my sample?
What is the shipping timeline?
How long does my sample stay stable after collection? How long can it stay stable during shipping?
What is the difference between SneakPeek Standard and SneakPeek FastTrack?
Can I use SneakPeek if I am having a multiple-birth pregnancy?
How is the DNA blood sample taken?
How accurate is the SneakPeek Early Gender DNA Test?
When can I use the SneakPeek test?
When in my pregnancy can I take the SneakPeek Test?
Do you have a pregnancy calculator that tells me when I can take the test?
How does the SneakPeek Test work?