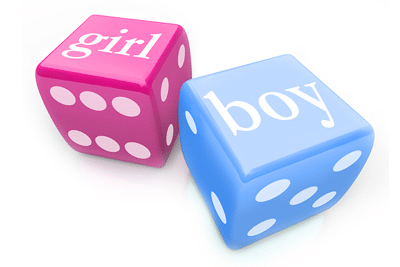 For millennia, scientists and astrologers have attempted to crack the mystery of predicting a baby’s sex. Stars were consulted, charts were made, but most gender prediction methods were correct 50% of the time—no better than a coin flip.

What answers were our ancestors not privy to? What determines the gender of a baby? Put away that telescope— the stars can’t tell you. A microscope might be a better tool for this discovery. Continue to learn more about how to determine the gender of a baby as well as how to use a gender prediction test to do so.

How A Baby’s Gender is Determined: A Cheat Sheet to Unlocking the Gender Mystery

We first begin with how a baby is made. We’re referring, of course, to the science of baby-making—not the mechanics.

Let’s start with some reproductive terminology to help paint a picture of what happens on a cellular level.

How does gender fit into this picture?

Women have two X chromosomes while men have one of each kind, an X and Y. To complete the chromosome pair, a mom-to-be’s egg provides one sex chromosome—always an X chromosome—and the sperm provides the other—which has the potential to be either an X or a Y chromosome.

Eggs can only provide an X chromosome because the woman is the source of an egg’s genetic material and women only have X chromosomes. But men have XY chromosomes—that means that a sperm can bring either an X or a Y chromosome to the egg.

So, what do these gamete cells say about who determines the gender of a baby?

Gender is Determined by the Father

Because sperm cells can carry either of the two sex chromosomes, it’s the male who technically determines the baby’s gender. This raises another interesting question:

Thanks to current medical research, it looks like the answer is no.

In a large genealogical study, Newcastle University researchers analyzed hundreds of family trees that were documented in a genealogy forum. Some of these trees dated back to 1600, and altogether they contained information on over half a million people!

The researchers speculate that the creation of sperm cells is likely to be determined by two types of genes. In a simplified scenario:

Another factor of whether males produce X or Y chromosome sperm may have to do with the height of the male, as evidenced during war time.

It’s been documented through historical records that during and after war times, countries will experience more male births. Is this mother nature’s way of rebalancing the population after a large number of males die during combat? Or is something else going on?

After World War I, the heights of soldiers returning from combat were compared with those who didn’t survive. Turns out, the average height of returning soldiers was nearly an inch taller than those who had fallen (about 66.4 inches to 65.5 inches). Satoshi Kanazawa says evidence purports taller parents are more likely to have sons than shorter parents. This small 1-inch difference across a generation of soldier-parents is enough to explain millions of excess boy births than girl births in the UK post WWI.

Are there different likelihoods of having a boy or girl?

To summarize, yes, there are different likelihoods of having a boy or a girl. And while the chances may be close to 50-50, evidence suggests that you can look toward the male’s family history and height for some indications as to which direction that chance skews.

The one way to know for sure? An early gender DNA test.

This is how the SneakPeek Early Gender DNA Test works.

Wondering how to know baby gender without an ultrasound scan? If you’re interested in discovering your baby’s sex sooner than ever before, you can take the test from the comfort of your home as early as 8 weeks into pregnancy.

The test kit will arrive with clear step-by-step instructions and everything you need to take the test. Once you’ve completed the test, you can mail your DNA sample to SneakPeek Labs using the prepaid packaging and receive the exciting news soon after the sample is received.

It’s simple, safe, and best of all, accurate. The Early Gender DNA Test has proven to be 99.9% accurate in laboratory studies.

Are you ready to know what your little one’s 23rd pair of chromosomes reveal?

Pew Research Center. The odds that you will give birth to a boy or girl depend on where in the world you live. https://www.pewresearch.org/fact-tank/2013/09/24/the-odds-that-you-will-give-birth-to-a-boy-or-girl-depend-on-where-in-the-world-you-live/

Psychology Today. The Returning Soldier Effect I: Why Are More Boys Born During and After Wars? https://www.psychologytoday.com/us/blog/the-scientific-fundamentalist/200802/the-returning-soldier-effect-i-why-are-more-boys-born