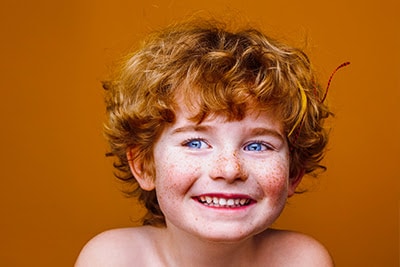 Before modern science, epic myths and old wives’ tales seemed to have all the answers about the source of freckles. Some say the little dots are marks left behind from angel kisses. According to Southern folklore, you can rinse freckles away by washing your face with the first dew of springtime. Ancient Irish myth says that freckles were anointed onto the Irish by the gods as a constellation map that captured how the heavens looked.

Who knew such little marks could have such mythic origins? But instead of consulting folk stories or legends, you may be wondering about the real-world causes of freckles, especially for your freckled little one.

When do babies get freckles? And if they’re not a product of celestial intervention, what causes them?

To understand where freckles come from, let’s start with what they are.

According to dermatologist Dr. Tien Nguyen, freckles are “small localized areas of hyperpigmented skin that appear darker than the normal surrounding skin.”

The coloring of our skin—freckles included—all comes down to melanin production. Melanin is a naturally-occurring pigment that everyone produces, but in different amounts:

This difference accounts, in part, for the vast array of skin colors present around us. Melanin production is also triggered by the sun’s UV rays, which is why time in the sun darkens our skin and creates freckles. In other words: if you don’t want more freckles, make sure to wear your sunscreen!

When do freckles appear?

The sun is a prerequisite for freckles. Because babies aren’t exposed to sunlight until after they’re out of the womb, freckles can’t occur on a baby’s skin until after birth.

So when do kids get these sun spots? Many parents find the first spotting of freckles between two and four years old, but there’s no specific timeline. This toddler age just happens to be around the time that kids begin spending more time outside, walking, and playing, which begins the process.

Why do only some kids have freckles?

If your fair-skinned son gets plenty of outdoor playtime, then where are his freckles? Is it just a matter of time? Are they coming soon?

Maybe, but not necessarily.

There are two requirements when it comes to freckles:

Without one of these two key components, your child will most likely never develop freckles, even on fair skin. It would be hard, if not impossible, to keep him out of the sun or lathered in sunscreen for the rest of his life, so it’s safe to presume that all kids destined for freckles will see them in the mirror at some point. But what makes your child “destined” for freckles?

The Science Behind Freckles

Whether your child tans in the sun or comes home from a day at summer camp with a new collection of freckles comes down to melanocytes. Melanocytes are the skin cells that produce melanin. The distribution of these skin cells determines whether your child will head back to school in the fall with an even summer tan or with cheeks full of sun-kissed freckles. 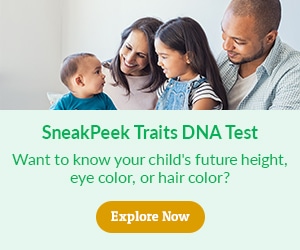 How Freckles Are Inherited

If you’re wondering, “where does the hair gene come from, mom or dad?”, you may also be pondering if your child will inherit your freckles (aka: “clumps of melanin-producing melanocytes”), the answer may come down to a particular genetic mutation. You might see the word “mutation” and flashback to the last sci-fi flick you watched. But mutations are simply changes in a gene that can be passed down through reproduction.

Scientists are still trying to understand why and how mutations happen. For the most part, certain mutations are a result of random biochemical reactions. While some gene mutations lead to diseases like sickle cell anemia, in fact, much of our world’s biodiversity is thanks to genetic mutations. For example, pheomelanin—a kind of melanin that produces red and yellow pigment that creates red hair—is a genetic mutation! So tell all of your redheaded friends you love their mutation.

Pheomelanin is the pigment that comprises freckles—and red hair— and the MC1R gene controls how much pheomelanin the body makes. A study in Human Molecular Genetics explored the influence of this important gene and its relationship to freckles.

The Methodology: All of the participants in the study had ephelides (the scientific name for freckles) in childhood. They studied patients with melanoma and non-melanoma skin cancer and a group of skin cancer-free subjects. Their study sample included only skin types I-IV (pale white skin that always burns through to light brown skin that burns minimally and tans easily), as determined by the Fitzpatrick skin type classification.

The Findings: Mutations in the MC1R gene lay the groundwork for developing freckles:

Essentially, individuals with mutations in the MC1R gene were more likely to have freckles than those without.

Additional Theories About The Source of Freckles

The MC1R is one of the most widely studied genes in hair color and freckling. Interestingly, even though red hair and freckles are determined by mutations in the same gene, just because you have one doesn’t mean you automatically have the other:

There are a few other factors that go into freckles and red hair:

So, based on existing scientific research, the three most important determinations of freckles might actually be:

While there’s a genetic link between parents and kiddos with freckles, it’s not straightforward enough to know with certainty whether or not your son will have a smattering of the little golden flecks. Even after he’s born, you’ll be waiting (who knows how many) years to find out if they will eventually pop up on your child’s skin.

But with SneakPeek Traits, you can see the future.

Okay, so there’s no crystal ball, and we don’t subscribe to any mystical freckle-predicting methods. Instead, we use a safe, easy-to-use DNA test. You collect the sample at home and send it off to SneakPeek Labs in a prepaid envelope. Wondering, “what color eyes will my baby have?” Well, we have the answers for you. After your results are analyzed, you’ll receive detailed information about tons of interesting physical features, including:

There are different physical traits inherited from a father than a mother, and we know exactly which ones to help bring answers to your questions. As fun as it is to think that freckles were bestowed on your child by the Gaelic gods to remind you of the night sky, they were really granted by you and your partner’s DNA—but with SneakPeek Traits, the discovery can be just as exciting as any epic legend!

Stanford at The Tech. Ask A Geneticist: Other Traits. https://genetics.thetech.org/ask/ask195