Significant research behind gender prediction testing in recent years has shrunk the timeline of when expectant parents can learn if they’re having a boy or girl.

Today, there are various ways to perform a baby gender prediction test,—each available at different times along the pregnancy, and each coming with its own set of pros and cons. The established methods that pregnant women can use are:

Discovering the gender of your baby is a magical moment along the pregnancy journey. So if you’re wondering how soon can you find out the gender of a baby, we have the full rundown of each of these gender prediction methods and when you can take them.

In the United States medical system, an anatomy ultrasound is normally scheduled between 18 and 22 weeks of pregnancy. While the purpose of the imaging is to check for the proper development of the fetus, this ultrasound also has the ability to reveal the gender of your baby.

During an ultrasound scan, the provider will look for anatomical defects, including:

How Do Ultrasounds Work?

For an ultrasound procedure, women are seen in a clinic setting, where a technician or your provider spreads a conductive gel on the exposed abdomen. The ultrasound machine sends out high-frequency signals through a probe which reverberate through her body. The sound waves then move through and reflect off different organs and fluid. The same probe picks up the reflected signal and digitizes it into an image, where the physician can then analyze the growing baby.

Ultrasounds as a Gender Predictor Test

Because the baby’s sex organs are well-developed by 20 weeks, this creates the perfect opportunity to learn about the baby’s gender. However, not all ultrasound sessions are successful at this. Here are a few reasons the provider may be unable to determine the gender:

It should also be noted that technicians and providers can make mistakes. Some mothers have reported that their ultrasound gender reading was incorrect and only found out with later ultrasounds (which not everyone gets) or at delivery. If you’re unsure about the gender determination, or if they were unable to determine the baby’s gender, a follow-up ultrasound must be scheduled one or two weeks later to try again.

Amniocentesis is an invasive procedure performed at the physicians office that extracts amniotic fluid through the abdominal wall of the mother and analyzes it for information about the baby’s health. While efficient as a baby gender test, amniocentesis is generally reserved for when other non-invasive tests reveal major chromosomal anomalies, such as Down Syndrome, Patau Syndrome, or Edwards Syndrome.

This test is typically done around 15-20 weeks of pregnancy and will offer direct access to the baby’s DNA and gender.

Downsides of Amniocentesis as a Gender Test

While it would never be a provider’s first choice to offer amniocentesis as a baby gender test, it will provide these results. Because it is an invasive procedure, the risks must be understood.

Again, these tests follow NIPT when a high risk for a birth defect was detected.

NIPT is a screening test for chromosomal abnormalities that can occur around the 10-12 week mark of a woman’s pregnancy. A provider or phlebotomist will take a blood sample from the mom and use it to screen for potential disorders that may affect the life of the child.

The reason this is possible is because when a woman is pregnant, both her DNA and the DNA of her growing baby are present in her bloodstream. Testing this combined DNA can shed light on the chromosomes of the baby, revealing anomalies and gender.

At the most basic level, a chromosome is a thread-like structure made up of DNA that holds information about the entire organism. Within every nucleus of every cell in your body, there are 46 chromosomes (or 23 pairs of chromosomes), each holding a different piece of the story.

One pair amongst the 23 is known as the sex chromosomes, and it identifies the gender of a baby.

What Are Chromosomal Abnormalities?

Because cells are constantly dying off, scratched off, etc., they go through a large amount of division and replication. This is one of the most significant duties of chromosomes: to aid in proper cell division. When there’s something wrong with one of the chromosomes, this abnormality is copied and replicated.

In adults, a chromosomal abnormality may lead to a nonfunctional cell, or cancer cell. If this abnormality continues to replicate without being repaired, the cancer will spread.

For growing babies, chromosomal abnormalities represent even greater risks. Because in early development they have so few cells compared to an adult, these abnormalities can have drastic effects throughout their entire body.

An NIPT screens for abnormalities, such as:

Because both mother and baby DNA is included in the screening, false positives can occur. The screening could pick up genetic abnormalities present in the blood that 1) aren’t present in the fetus and 2) haven’t affected the mother’s health.

NIPT as a Gender Predictor Test

Because there are sex chromosomes, an NIPT acts as the perfect gender prediction test. The benefits of using an NIPT to determine gender include:

Non-invasive prenatal testing does not come without its drawbacks. Here are some of the cons of NIPTs:

Although technically a form of NIPT because it uses information from the baby’s DNA that’s found in mom’s blood, this test’s sole job is to determine the gender of the baby. The early gender test looks for male chromosomes in mom’s blood. If any are found, you can be sure they aren’t coming from the mother. In other words, it’s a boy! If no male chromosomes are found, it’s a girl! Simple enough, right?

Because this test is only looking for the presence of male chromosomes, it is accurate with a much smaller fetal fraction than the typical NIPT, which is screening for overall chromosomal abnormalities and needs to tease out the difference between mom’s chromosomes and baby’s. This means the DNA-based gender test can be taken as early as 8 weeks into pregnancy with a simple blood sample.

SneakPeek offers two ways for sample collection, a clinic collection option or an at-home gender blood test that is clinically-proven. In published studies, researchers found that the test is 99.9% accurate at 8 weeks into pregnancy.

Additionally, with SneakPeek, you can have your results within 24-72 hours. That way, you don’t have to wait any extra time before knowing your baby’s gender. And prices are significantly cheaper than an NIPT ordered by a physician—starting at only $79.99.

It’s important to reiterate that the point of going to your provider during your pregnancy goes beyond discovering your baby’s gender. While this might be one of the more exciting pieces of information you receive, there are serious risks that come with not having adequate prenatal care.

Early gender DNA tests are not meant to replace the screening efforts of NIPTs, nor should they replace ultrasound appointments. Instead, use the baby gender test to get to know your baby before you normally would at your office visits. That way, the planning for your boy or girl can begin immediately.

Ready to Know Your Baby’s Gender?

Never before have parents had the power to discover their baby’s gender so early in a pregnancy. And with only a few drops of blood from the mother and no risk to the baby, it’s no wonder parents are raving about the early gender DNA test.

If you’re excited to throw a baby gender reveal party and don’t want to wait, SneakPeek has you covered with early gender determination. 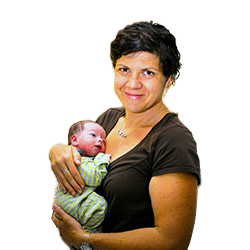 Sarah Bay, CNM, APRN has been practicing women’s health related care since 2004, first as a labor and delivery nurse, and then as a Certified Nurse Midwife and Advanced Practice Registered Nurse. Since 2011 she has been practicing full scope midwifery care in the southern New Hampshire area. In addition to routine prenatal, labor, birth and postpartum care, she provides wholistic well women’s care such as annual exams and birth control with a perspective on the whole woman, mind and body.

Mater. Testing for Down syndrome and other chromosome abnormalities. http://brochures.mater.org.au/brochures/mater-mothers-private-redland/testing-for-down-syndrome-and-other-chromosome-abn

NIH. What is a high-risk pregnancy? https://www.nichd.nih.gov/health/topics/pregnancy/conditioninfo/high-risk